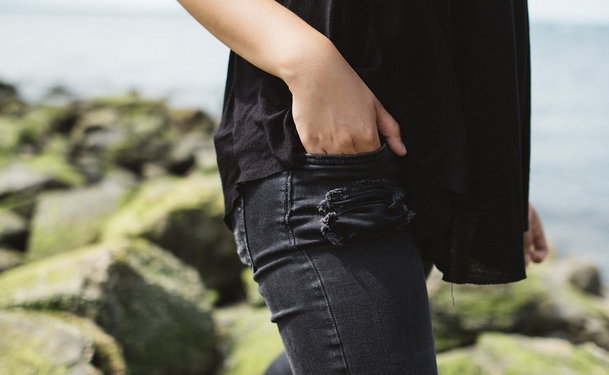 One of the most common complications after breast augmentation surgery is implant malposition. This occurs when the implant is in an incorrect position on the chest wall. This may include incorrect position of the implant superiorly ("riding high"), inferiorly ("bottoming out"), medially ("symmastia or uniboob") or laterally (falling outward into the axilla). We will discuss the latter three.

Types of implant malposition (and how to fix them)

Known also as medial malposition or "uniboob", symmastia occurs when the breast implants move too far toward the mid-line and the two implants actually touch one another in the center of the chest. If the horizontal muscle that is connected to the sternum and goes across the implant is cut during surgery, then the implant can move toward the middle of the chest.

Symmastia may result from overly aggressive attempts to alter chest wall anatomy, usually in an effort to increase cleavage for patients. This outcome is made worse by using larger implants in thin patients, and is a problem for implants over or under the muscle, though submuscular implant placement allows the muscle to provide some softening of the transition to the cleavage area from the augmented breast mound. 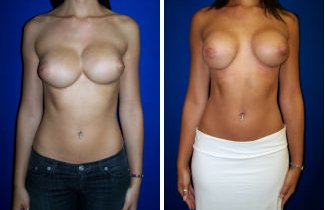 This 26-year-old patient from San Diego, California, had her first breast augmentation in 2005. She noticed malposition of her breast implants and consulted an accredited plastic surgeon regarding symmastia repair in 2007. Reconstructive surgery was performed in June of 2007 using saline implants filled to 330cc on the left and 330cc on the right. 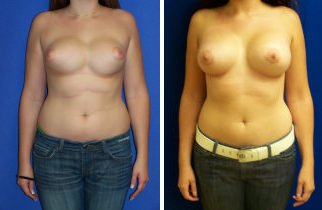 This 23-year-old patient from San Diego, California, had her first breast procedure in 2005. She also noticed malposition of her breast implants and consulted a certified plastic surgeon in 2007. Reconstructive surgery was performed to correct her symmastia in March of 2007. She has 450cc saline implants.

Specific dressings and bra were used in both patients to reinforce the repair. The bra that is worn after symmastia repair is referred to as the "thong bra". It is used to stabilize the area after symmastia reconstruction. This will allow the sutured area between the breasts to heal properly without excessive pressure being applied to the area. 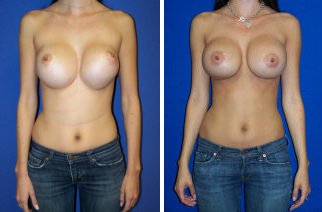 This 25-year old-patient from Palm Desert, California, had her first breast augmentation surgery performed in Mexico. A few months after getting her breast implants, she noticed that she had developed symmastia (the implants were touching down the mid-line) and her implants were bottoming out of both breasts. There was encapsulation on both sides, and the areola were displaced laterally on both sides as well. Three months post-reconstructive surgery, there was still some bruising and swelling, but the patient achieved the results she desired with silicone gel implants (575cc on the left and 533cc on the right). 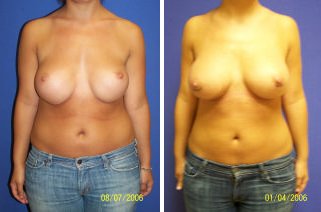 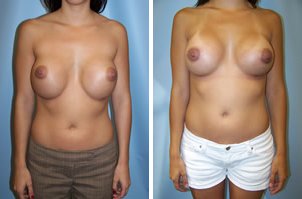 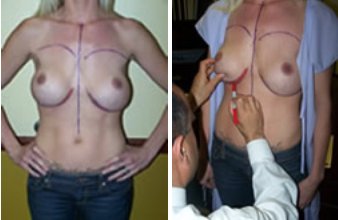 This 30-year-old patient traveled from Arizona to correct her bottoming out and the lateral displacement of her implants (left >right). The surgeon performed markings on the patient the night prior to surgery to assist during the operation the next day. 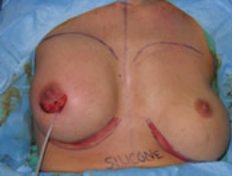 Below, the patient is only a couple of weeks post-operative revisionary breast surgery. 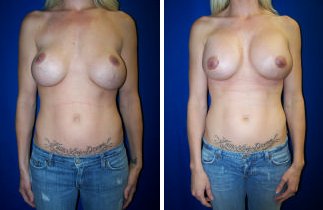 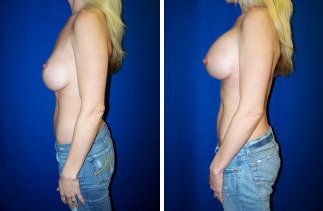