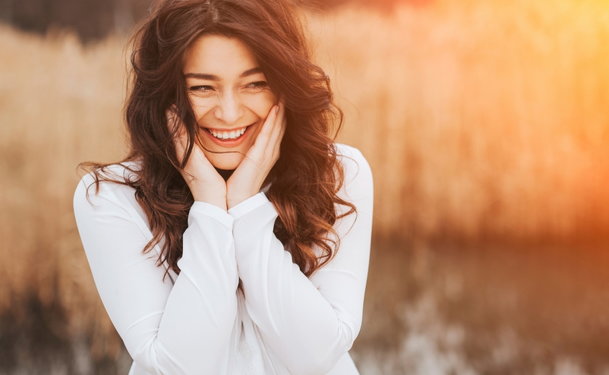 How to Fix Your Tubular Breasts with Breast Augmentation

Tubular (also called tuberous) breasts have a very narrow base and usually a long skin envelope. Sometimes people refer to tubular breast shape as "Snoopy's nose" due to the shape.

In the most severe cases of tubular breast, a breast lift can be done through an incision around the areola, making your breast into a more rounded shape that you will be happy with. In many cases however, a lift is not necessary. You should be aware that the final result will take months to see and you will need to be patient. 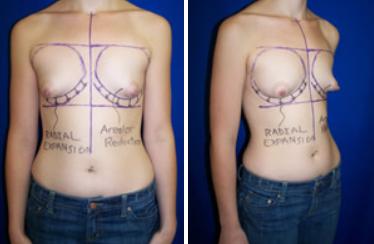 The surgery is usually done under a light general anesthesia and takes about two to three hours. The incision is usually confined to around the nipple entirely or beneath the crease, and can be very inconspicuous. The procedure involves making internal incisions to release the tight breast tissues, making a larger space for an implant, rounding out the lower breast crease, and correcting enlarged and protruding areola.

Placing a breast implant underneath the breast and pectoralis muscle, along with making small incisions on the inside of the breast will usually allow this tight skin to spread into a better shape. This process can take a few months but usually results in a very pleasing shape without the telltale scars of a breast lift.

What to expect after tuberous breast correction surgery

There will be a recovery time of 1-2 weeks just as with breast augmentation surgery for non-tubular breast patients. Bed rest, along with plenty of fluids, is necessary after surgery. Your chest will be sore.

A brassiere and bandeau will be fitted for you during your first week of recovery. These will need to be worn for a month. You will not be able to shower until your sutures are removed. Initially, breast implants will appear to be slightly higher than normal and your breasts will be swollen. Over time, the breast implants will descend to a more natural position.

Steri-strips are placed around the areola (where the incision is made). These steri-strips will fall off on their own.

A patient of Dr. Pousti provides insight into her experience: 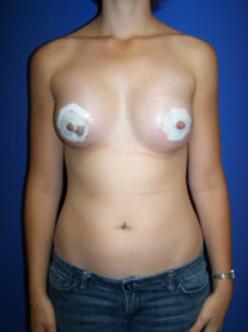 I have struggled with the insecurity of having small, misshapen breasts (tubular/constricted breasts) for years. Shopping for clothes was a nightmare and nothing ever fit or looked the way I wanted. I swam competitively for many years and the humiliation of wearing a Speedo swimsuit as an AA cup size was almost unbearable.

After years of wearing padded bras and praying every night that my boobs would grow I finally decided to explore the option of plastic surgery. I toyed with the idea on and off for about 4 years and finally last December became very serious and started researching plastic surgeons.

I didn't limit my search to just SD and ended up visiting with doctors in both Northern and Southern CA. I am a complete Type A so I had folders and folders of information about the procedure, doctors, testimonials, side effects- everything. I saw quite a few plastic surgeons and was looking for someone special. Someone who was not only a top expert in their field but who also had the ability to understand my wants and needs and work with me to achieve them. After meeting Dr. Pousti for the first time I was positive I had met my match. He is not only a phenomenal surgeon but he is also extremely dedicated to his patients and in touch with their wants and needs. I didn't feel like just another number as I had in other offices.

Given I was not having just a straight forward breast augmentation because of my tuberous breasts, I was anxious and ended up coming in numerous times for long question and answer sessions before even scheduling surgery.

When I came into the offices his staff was so friendly and always greeted me by name. Dr. was always prepared and willing to spend as much time as I needed to discuss my questions and concerns. He was sensitive to the look and shape I desired and was also honest and realistic with me about what he thought he would be able to achieve. By the time the surgery date came around I had nothing but the utmost confidence and trust in Dr. Pousti and I was not disappointed.

The surgery went smoothly, the recovery was manageable, and the results are beyond my wildest dreams. I try not to be overly emotional but I couldn't help but tear up the first time I saw my new additions because they exceeded all my expectations. I have not had any complications despite such an involved surgery and they look so natural and real that not one person I know had a clue they are not my own because they are so proportionate to my body. I have a confidence I never had before and in large part I owe that to Dr. Pousti. I wholeheartedly recommend Dr. Pousti to anyone even considering any type of plastic surgery as you would be doing yourself a disservice not to choose the best!

I am currently 4 months out and everything has exceeded my expectations. My healing process has been incredible. I was initially very worried about having incisions around the entire areola and was worried about both sensitivity and scarring. After surgery I only had feeling in one nipple and was concerned I wouldn't gain sensation back in the other side however, about 3 months post-op, I regained full feeling in the other side as well.

In addition, my scars had scared me a little when I first saw them, as they were still quite red and the skin had to re-attach itself after surgery. But despite my first reaction everything has healed really well. My scars started to improve quite quickly after surgery and although they still have some lightening to do they are fairly discreet and blend very well into the natural ridges and texture of the nipple area.

I am also so happy I chose to go with silicone implants. They were probably the best choice I ever made. I had gone back and forth about getting silicone since they were just released last year but they have looked and felt so natural from just a few weeks out and only continue to improve with time.

Overall, there is nothing I would change. Thanks to Dr. Pousti the surgery results were incredible. My breasts have a round full shape instead of the pointy look they had before. They feel extremely natural and the scars are healing extremely well. I have not regretted having the surgery for even a second!